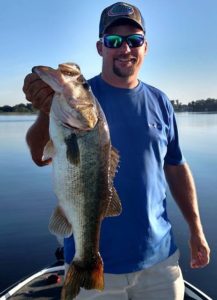 Captain Monte Goodman is a licensed USCG Captain who’s made a career of doing what he enjoys. As a professional bass guide and successful tournament angler, he has over 20 years of professional bass fishing experience. He’s a member of bass tournament trails such as FLW, FOMNTT, BFL, and B.A.S.S just to name a few. He has well over a hundred local tournament wins, and has won back to back Angler of the Year honors in the largest B.A.S.S. affiliated club in the world, and has won numerous Big Bass honors. Due to his reputation as an expert bass angler, he’s been featured in numerous newspaper and magazine articles and has appeared on sever TV shows including Reel Time Florida Sportsman.

Captain Monte is a vocal advocate of Florida’s habitat and conservation efforts, supports and practices “catch and release” himself and encourages others to do the same. He supports the efforts of the Florida Fish and Wildlife Conservation Commission and the Trophy Catch Program. Through the program anglers are able to win prizes and gain recognition by catching then releasing a trophy bass over 8 lbs.